The 2nd leg of my road trip from Chennai to Delhi saw me taking a major detour to criss-cross Rajasthan during the peak winters – arguably the best time of the year to see the desert state.

I was doing the trip solo and sticking to my Travel Bible – the Lonely Planet- staying at accomodations for backpackers and seeing how most of these adventurous people see our country. The Rajasthan leg started with Udaipur- the lake city and took me from there to Jodhpur and finally to Jaisalmer.

Jaisalmer has a unique charm that somehow eludes the other major tourist locations of Rajasthan. Maybe its coz you have the “real desert” with its trademark sand dunes all around you, or maybe it was bcoz I had stayed inside the fort for the length of my trip.
While I was driving into Jaisalmer, I read up in LP that one can stay @ Guest houses inside the fort. These accomodations had basic amenities but LP recommended it was one of the best ways to experience the walled city- so I went along with the recommendation.

The fort walls are closed in the night and the life inside reminds one of the legendary “Ram Rajya”- the shops are not closed and most leave their goods out in the open un-attended for the night. The likes of me who find it hard to sleep early due to the excitement can just enjoy walking around the fort during night and if you have the moon to give you company- you might have a great time.

So it was, I spent a couple of days exploring the city, enjoying the fort life and doing a little shopping for folks back home, working very hard to get the best desert safari plan chalked out. This was December 31st 2006 and I was all set to start the new year with a 3 day safari deep into the Thar.
I kept telling myself the whole night, what better way to start the new year (esp for a travel buff like me) than a safari deep into the desert close to the Pakistan border. I was all prepared, camera batteries charged, sun screen, shades & all of it.

But destiny had other plans for my new years.

We were supposed to leave at 0700 hrs sharp.The tour manager finally came & informed me at 1000 hrs that they had to cancel the tour as many of the tour participants had taken ill after last nights revelry. Can you even begin to imagine how I felt? I looked around desperately to see if I could join any other group leaving that day, but no such luck.

So with a heavy heart, I decided to continue forth with my journey- taking it as a sign that I have to return to Jaisalmer to do the safari. I called up a friend in Jaipur and told him that I would come & see him in the evening and asked him to arrange some authentic “daal-bhaati” for supper. I stopped before Bikaner for breakfast and continued almost non-stop towards Jaipur. The roads in this part of the country are just awesome and theres hardly any traffic, so i was doing pretty high average speed even in my Santro.

I had just crossed Bikaner, refeulled and was getting into the groove when I felt a lil sleepish. I decided to stop at a road side tea stall for a quick cup of hot tea and while I was sipping it, I saw a road on my left, few metres down from where I was, with a huge sign saying DELHI.

Now before I tell you how stupid I was that day, lemme build up my case (though my Jaipur friend doesnt buy any of this). This other road was almost as wide and well maintained as the National Highway that I was on. The road sign was of the blue and white variety that we now associate with our generation of roads.

So as you may be thinking already, I took the left after the tea-break. The road was great for about 30 odd kms and then suddenly a bad patch appeared and I thought maybe this will pass- you see bad patches on NHs also.So I went another 40-50 Kms and the paved road suddenly gave way to a less than single road surfaced with bricks- you know the ones you inside villages, where you feel like you are riding one big continous rumble. 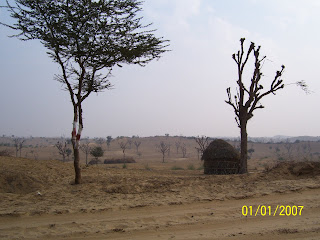 By now I had realised that I had made a huge mistake coz the road I was on, had no signs of civilisation – absolutely no villages on either side and all that one could see was sand dunes and babul trees. It was also too late for me to go back & rejoin where I had left the well paved perfect NH – where I was averaging 120 Kmph.

I drove & drove, splashed water to keep myself awake until finally before sunset I had hit some state border where I was stopped by a Haryanvi speaking police officer. I realised I had hit Hissar, bypassing Jaipur and other places inbetween. It was also now that I had finally got a signal on my cell phone. You can imagine what remote parts of the state I had just crossed 🙂 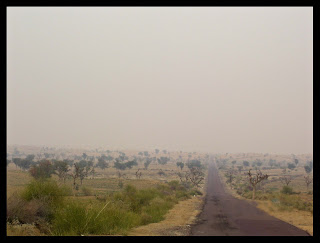 I called my friend in Jaipur & told him about my stupid mistake and how I would have to give the Daal- Bhaati a skip this time. I asked around for directions and continued towards Delhi. But there was more in store. At around night in the evening, we were suddenly engulfed in some really serious fog. So much so that all I could see was the white paint on the road next to my tyres (the white lines that identify lanes). It didnt help that my car had no fog lamps- why would someone want fog lamps in Chennai?

I was barely doing 5-10 kmph and had to stop my car and the car behind me- pleading with that guy to move ahead and let me trail him, coz he had some really powerful fog lamps… Thanks to that nice chap, we covered some 50-60 kms in the densest of fogs in 2 hours and finally entered Delhi.

By the time I reached home it was way past mid night and I had done around 800 kms almost non-stop (in a day of driving one brunch stop and one pit stop for hot brew dont count- do they? )